Attended the Ride for Heart this year.  It's the second time I've done this ride.  They close the Gardiner Expressway and the Don Valley Parkway and allow us to bike on them for a few hours Sunday morning.  It's a fundraiser for Heart and Stroke. 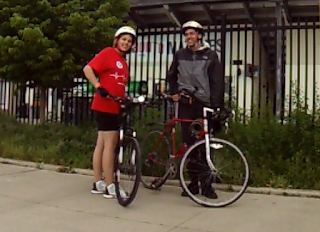 Here's me and Meghan ready to go.  The forecast was for rain, and it was lightly coming down when we left, so I took my commuter Fiori.  It gets wet a lot already, and has a fender. 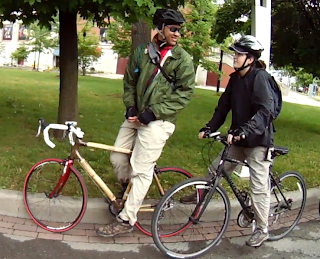 You get to see all kinds.  This guy was riding his bamboo-frame. 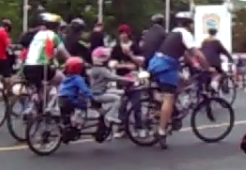 Okay it's hard to make out the picture.  My idea here of using the HD video mode and taking crops from the footage isn't working out so well.  It's a picture of a guy with both daughters on a tandem trail-a-bike.  That makes three of them all together.  I love that!  I would totally have had one of those if I had known they made them.  That would have been 15 years ago, and maybe they didn't back then.  I had a Bell carrier that I plopped my kids into. 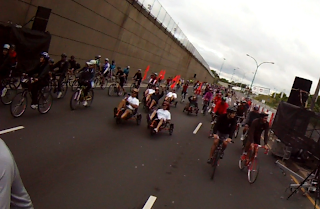 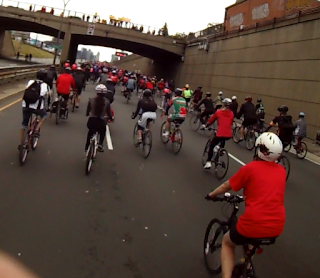 Off the starting line, we are in the trench running beside CNE grounds.  It's a shallow uphill climb to the raised Gardiner Expressway. 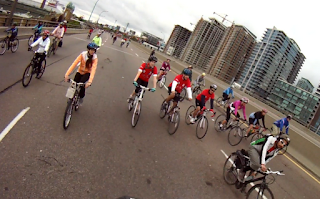 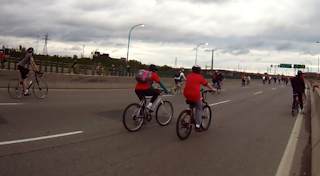 There's the CN Tower in the background.  Also yet another skyscraper going up. 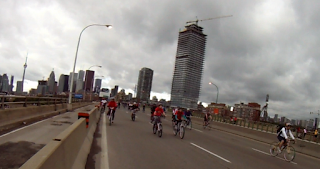 Not a bit of rain all day.  I should have brought my racing bike.  No matter, it was a great time, and I can keep up with Meghan just fine on my commuter.  She's on her Specialized trail bike.  I swapped out the knobby tires with some large-width city tires, so it goes fast on the pavement. 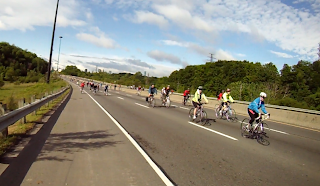 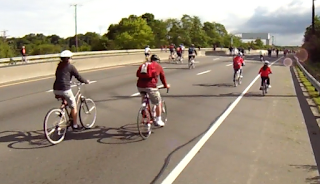 The sun was in and out all morning. 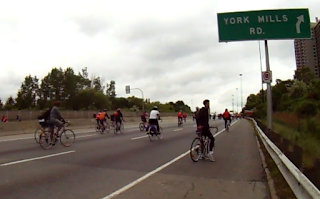 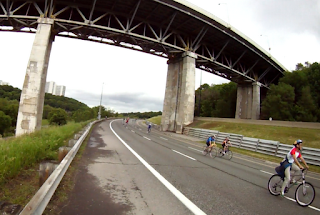 Out along the Parkway there's a couple half-decent hills, including the climb from river level up to the Gardiner.  We used the 50km route, which is from CNE grounds all the way out to the 401 and back.  Basically the same route as used by the triathlon July 22.

Thanks to everyone who donated to my team.  Shout out to Ted who came along with us.  It was his idea!  Hi Ted. 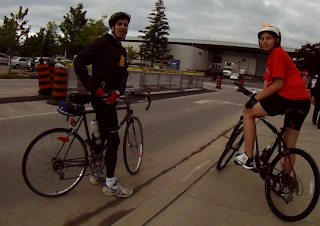